We had a few thunderstorms last night.

Now, before you’re all, “Wow. She’s so low on material that she now has to write about the weather,” on me, know this:

There were thunderstorms, AND:

Wow. I KNOW. ALL that in one night?

I bet you can’t wait to read one. So (deep breath) here goes:

Thunderstorms started around three am, because, why not? Everything of import happens at three a.m., otherwise, WE COULD GET SOME SLEEP AROUND HERE.

Immediately, Blonde comes in to bedroom and pokes his index finger right between my two sleeping shoulder blades. “Yep, that’s the thunder,” he says, all matter of fact. “Move over.”

Let’s stop here for a moment. Please don’t judge me. I know, I broke the rule #345677, allowing the child to sleep (thrash about, stick his foot in your face, steal all covers, freak out the cat, etc.) with you.  Well, sorry. I allowed it. What I mean by that is, I was so sleepy I don’t remember much and then later I woke up to a small person all shellacked to my side, and at that point I just gave in because he was stuck to me. I was so tired I think I would have let Sasquatch try to horn in on our king size bed. “Sure, Fuzzy,” I would have muttered. “Just don’t shed on the bed.”

Then, there’s Red. Red did an unfortunate thing.

Because Momsie sometimes just totally blows, she left the oregano oil sitting on the dresser in the boys’ room. She uses oregano oil once in a while, when she remembers to,  and then she feels very smug and crunchy and all natural and stuff. And, it makes the room smell like a pizzeria and who doesn’t like that? Red, for some toddler reason stuck wayyyyy down inside his strange little head, got up at 3:15, OPENED the oil, and proceeded to taste it. It does make a bit of sense, I guess. Maybe he wanted Stromboli?

Yes, I know. There was screaming and crying and he actually said: “It feels like a poinkypine quills in my mouth. But, da NORTH American one, not the African Crested one because der quills are much biggerrrr!” Thank you, Wild Kratts!

That was solved with some milk and a popsicle which he ate, in awe, due to the fact that it was now close to 4 AM and my goodness, first Stromboli now da popsicles. What next? Cashew chicken?

I know. You’re on the edge of your chair, right?

So, Red, all tired and spicy by the Baptism of Instant Burning Pizza, fell fast asleep.  I crawled back to my room. And then Red got up, curled up in the boys’ huge lounge chair where we read books that cost a hundred frackillion dollars (this is foreshadowing) and proceeded to pee ALL over the expensive (did I mention? A frackillion?) upholstery. SOAKED it. Evidently he drank a Big Gulp and some decaf before bed.

Now, you ask, HOW did I KNOW this happened? (Maybe… you’re not actually asking this. Maybe you’re just waiting for this to be over. But I can hope.)

Ahem, WHY? You ask? Because the hubs was now trying to open our storm windows. He had loudly announced to me, just as I was finally drifting off, “I am so HOT. Are you hot? Dear? DEAR? ARE YOU ASLEEP? I THINK WE NEED TO DISCUSS THE TEMPERATURE OF THE ROOM RIGHT NOW BUT I DON’T WANT TO BOTHER YOU IF YOU’RE SLEEPING.”

Ok, there’s more. Next, I discovered the soaking wet Red – I am a bit fuzzy on this part, but I think I had left our room in a huff because so tired and storm windows squeak and I had had it with life. Leaving in a huff, incidentally, doesn’t work on my husband. He didn’t notice which I think made my sleepy huff even… huffier. “But,” you say with rapt attention, “finding the pee?” Well, I also chalk THAT up to my natural ability to find any sort of disgusting mess in our house so that I have to clean it. It’s like my life is a big Where’s Waldo of finding day old vomit on the wall (THE WALL) behind Blonde’s bed and knowing, somehow, that a putty knife and a loss of appetite for about twelve hours were the only things that would take care of that solidified awfulness.

But wait, (*weakly*) there’s more. My enthusiasm is waning, but I’m locked in now, so I gotta finish this.

Walked a sobbing Red down the hall to the darkened bathroom to help him wash off a bit. Once we got into the bathroom, we found ourselves wedged in with a window. A window, and my husband. So, me, Red, a window, and a six foot two dude are now trying to negotiate a bath for a sobbing toddler and I am all, “My darling sweetheart husband, would you be so kind as to take the DAMN WINDOW OUT OF THE BATHROOM WHAT IS YOUR PROBLEM I HATE EVERYTHING.”

So, got Red squared away and carried him down the darkened hall to find a husband, standing in the boys’ room WITH THE WINDOW AGAIN. I KNOW RIGHT. HE LOVES THAT WINDOW. “What, why? Do you just carry it with you wherever you go now? Are you and Window friends? Can you please take that thing somewhere else? I know, put it in our bed. That’s a good spot since I’m heading there next. I HATE EVERYTHING.”

The window went away. I think the hubs finally stored it on the kitchen table or under the car or something. I don’t KNOW. Is this not the most fascinating thing you have ever read?

Ok, so then I decide to pour baking soda all over the brown chair. Didn’t try to soak up pee or do anything else, just dumped it. Voila, baking soda, fix it! And then walked down darkened hall to wash hands. Came back to find Red CURLED UP IN PEE COVERED BAKING SODA. HE WAS LIKE A DISGUSTING POWDERED DOUGHNUT.

I gave up, died a little inside, dusted him off and led him back to bed. Considered taking a match to the chair.

Oh! So then this morning, over a bleary cup of coffee filled with despair, I eyed the hubs with derision. “I had a dream about you last night,” I told him. It’s surprising, really, that I had the time to have a dream at all, in the forty minutes of actual sleep I got. But, I did. And it went like this:

“I dreamt that Ringo Starr came up to you and asked you to be a fifth Beatle, and you DID. You just LEFT. And, he put you in a Sergeant Pepper’s coat and hat and my word, YOU JUST UP AND LEFT ME. I am so mad at you right now.”

Hubs, blinks rapidly, processing that he was a Beatle, and now he’s not.

“Was I a fifth or a fourth?” he asked. I narrowed my eyes. “Was I taking John’s place? Because that would be crazy. I would be booed off stage.”

“I am sure that you were a FIFTH and would be booed anyway. Marriage Wrecker.”

The hubs is very still. At moments like this, he knows not to move, or speak, or even think. This comes easily to him.  He has the sensibility of a possum in situations like this. A true Australian possum, not the North American opossum, by the way. (Thanks, Wild Kratts!)

I hate him, and his silly fringed Sgt. Pepper’s hat too.  “I hope you were happy with your little band and all.” 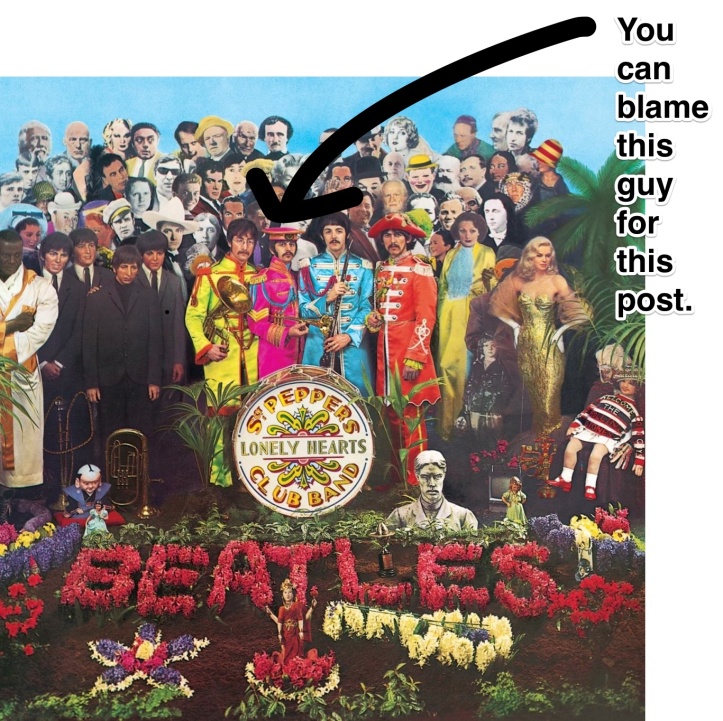 * I know, I know. If that’s the reader’s condensed version, how long was the original? Epic. Epic, I tell you. It was War and Peace. With a window.