The Day the Dragons Came To Our House

Did I ever tell you about the Horrible, Grumpy Day at our house?

It’s a really interesting story. In it, we were all having a really horrible, Grumpy Day. Like, all day long. There had been so much Grump at our house I had feared it had moved in, forever, like a sullen teenager in the basement. All smelly socks and rolling eyes, and passive-aggressive despair. “Motherrrrrrrrrrrr,” whined the Grump. “I don’t like that my Cheerios are round. I also don’t like: sunshine, consciousness, anyone breathing anywhere in my vicinity, and, also, I think, underpants. In other words: I HATE EVERYTHINGGGGGGG.”

Actually, this story is not so interesting.

Lately we seem to be enmeshed in a theme of grumpiness. Usually, Momsie comes in and saves the day with some brilliant plan, like a heavy application of ice cream, WITH the sprinkles.

But on this day, even sprinkles AND whipped cream wouldn’t have done the trick. We were done for.

There was this loud thumping at the door, and guess what? IT WAS A GIGANTIC BOX.

Ok. Here I have to interject with some shame, because I have absolutely no pictures of any of this. None. I was so wonderfully interested in the box, as were my children, that I forgot. I get points, however, for allowing the boys to help me open it. At this point in the day, I was kinda thinking, “Don’t disturb them. It’s kinda quiet upstairs. There’s been no shouting or wailing for at least ten minutes, so I should just, I think, leave sleeping dogs lie. Or is it lay? No, lie. And yes, my children are the dogs, here.”

As fascinating as this inner dialogue is, I will lessen the suspense and tell you that I did, in fact, call the dogs.

And lo, they came. And we opened the box. And it was a bunch of cool stuff for this movie:

Now, let me explain. I have this really really cool gig with the Mighty Netflix. I write for them. They, occasionally, send us cool promo stuff. And by, ‘cool promo stuff’ I mean:

A BOX OF CHRISTMAS IN JULY. HUZZAH!

I almost started twerking, singing, “DRAGONS IN DA HOUUUUUWWWWWSE” I was so excited. We can all thank our lucky stars that I controlled myself.

Then. It got even MORE crazy. The two wee ones, all over stimulated with the gigantic box, started whispering amongst themselves and eyeing me. Something was up. They then approached, all quivering and eyes as big as saucers. “Mommy?” lisped Red. He still had a piece of red packing confetti stuck to his cheek. “Mom? Mommy? Mother? What is this How to Train Your Dragon business? Is it, perhaps, an animated movie for children??”

I know. I have totally held out on ’em.

“And,” added Blonde,  “Dearest Mother, if it is a movie, and we are receiving stuff from The Netflixes about it, don’t we need to, you know, WATCH IT?”

Both boys stared at me in silence. Since I have absolutely NO footage of this, I will show you a similar rendition:

Wellllll, you probably know how the rest of the story.

We sat down, with popcorn, our blankies, and some nervous giggles because lo, we were watching a MOVIE in the middle of the DAY. This was rather epic.

And, so was the movie.

I have so much I want to tell you about this movie, y’all. I LOVED it.

This movie. It had heart. And a really great soundtrack. And adorable characters.

And the dragon is so CUTE. I kinda want one of my own!! I’m sure he would get alone with Steve, no problem!

And, it also had this guy:

Now, granted, his character is not oozing sexy charisma:

BUT, it’s so easy… All you gotta do is every time Gobber the Belch talks, you just clamp your eyes shut and listen to his voice and McBAMMO. Instant Craig Ferguson fix!

This also works for Gerald Butler. But since he plays the dad… it’s a wee bit weird. But, as is the standing rule for animatin: It’s ok as long as you don’t tell anyone.

Sigh. Dreamy Scottish guys. I swear, they could read the menu at McDonald’s (GET IT. SEE WHAT I DID THERE?) and I would get all McSwooney.

I really loved this movie, and so did my children.

You truly saved the Grumpy Day.

And you, my sweet hunka Scottish haggis, you. 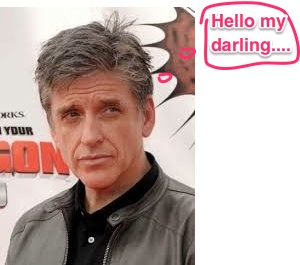