As I promised, I am happy to share with you today my interview with Rob Hoegee, the head writer for Amazon Prime’s Original show: 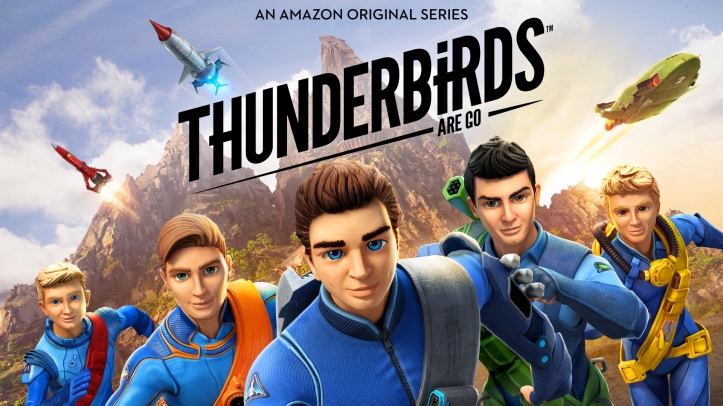 When first presented with this opportunity – I also had the option to interview a few of the actors from the show, which, you know, is kinda exciting. I mean, the highlight of my days lately have been avoiding laundry and negotiating constantly with two sweet cherubs who have terrible work ethics. So, taking an hour out of my day to speak to someone who gets to be all action-adventurey and Hollywoodish? SURE!

However, I really wanted to talk to Rob. Rob is a writer. And I wanted to know about his writing life.

Come to find out, Rob, aka Big TV Writer, is a lot like me!

(Disclaimer: it’s always about me. Sorry.)

First of all, let me explain the show.

Amazon’s brand-new original animated kids series aimed at children aged 6 through 11, Thunderbirds Are Go, is a reinvention of the 50-year-old classic Thunderbirds, and features the world’s most famous family of heroes, International Rescue, and Rosamund Pike (The World’s End, Gone Girl) as Lady Penelope. The series catapults the five brave Tracy brothers back onto television screens, where they’ll pilot their vehicles from the depths of the oceans to the highest reaches of space, performing impossible rescues across the globe.

Produced by ITV Studios and Pukeko Pictures in collaboration with world-famous Weta Workshop, the series is made using a unique mixture of CGI animation and live-action model sets. Thunderbirds Are Go will deliver a new level of action-adventure animation for today’s audience while paying tribute to the legacy of model locations from the original series.

The reason I am so excited about all of this is that I grew up watching the slightly, teensy weensy bit older version. It featured real model sets and puppetry, and it was sooooo cool. In fact, I was concerned that the 2016 version would not carry any of this original flair, but this new show has beautiful, intricate sets that trick the eye – there is a level of artistry here that is truly impressive, and, especially with the nature shots, rather hypnotic. The show passed my aesthetics. I am rather picky about all that.

In other words, this, my friends, is no Caillou.

When Rob and I spoke, I gushed with him about the show, and he was quick to respond that although he is the head writer, his favorite part of the creative process is working with such a great team who all contribute to the show’s success.  Rob has written for other children’s animated shows before, such as Generator Rex and Teen Titans, but I could tell he was especially proud of Thunderbirds.

“The show is really a great mix of live sets, great CGI, and story. And for me, it is one of the shows that I can trust my kids to watch, without wondering about what they might be seeing, you know?”

I do know. And I appreciate his goal – to make this truly “family entertainment,” a show that mom, dad, and the kids can watch, without worrying about content at all, and also, without nodding off with boredom because it’s a total snooze fest of silly characters, whining, and garish primary colors.

I had tested this goal earlier in the week when we all sat down to view the first episode, “Ring of Fire” with my boys. (I had hoped there would be a Johnny Cash tribute, but alas, no. You can’t have it all.) HOWEVER, it’s a kids’ show, right?  And yet, I have to say, I WATCHED IT. What I mean here, is that I didn’t fold laundry or plan menus or write an article or edit a blog post or cuddle/grip the cat or knit badly or contemplate world peace or decide once and for all if contouring my face is just insanity (it is). I just watched.

Red plopped down on my lap, Hosmer, the dog leaned on us both because jealous, and Blonde curled up right next to us.

Guess how I know the boys loved it? I call it the popcorn test:

We had a bowl of popcorn. They didn’t eat any.

Rob knows kids. He has two little ones, a boy and a girl, and here is where I really knew that we were totally going to have the best interview ever:

We both named our youngest the same name! I know, right! We bonded.

Anyhow, it was a great interview. Rob was funny and affable and kind. He has a great vision for Thunderbirds. “This show is all about helping others, lending a hand, going in to rescue those in trouble. There are plenty of shows out there about bad guys and bad stuff and police and all that, but this show? This is about the firefighters who come in to save the day.”

This show is all about teaching cooperation, courage, and selflessness, and I cannot thank Rob enough for writing it that way. But he summed it up quite well:

“In all my fifteen or so years of working on animated children’s shows, I have to say, this is the one of which I am most proud.”

Click here to watch the trailer for Thunderbirds are Go, and see for yourself the amazing real- action and CGI mashup that makes this show so fun.

Oh, and here are two other fun facts: David Graham, veteran voice actor who was Gordon Tracy of the original classic, returns to plays Parker! And Rosamund Pike, of Gone Girl, plays the lovely Lady Penelope.

Enjoy! International Rescue is here to save the day!