Working Out When Old.

On the threshold, so to speak.

Knocking on the DOOR of old. Actually, more like knocking, and then running away because face to face door stuff is hard.

Is this getting old?

Anyhow. I have been running again. And no, not FROM anything. Just running. Just for my own personal enjoyment. Wanna know why?

BECAUSE I AM FLIPPING CRAZY.

I mean, really. Why? WHY? Why so fast, Momsie?
I’m not sure. Sometimes I like to pretend I’m being chased by rabid squirrels. Because my life lacks suspense, I guess, and rabid squirrels do the trick. Other times, I just make sure my ipod is on endless repeat of “We Are the Champions” and I pretend I, too, am a champion. And I’ll keep on fighting, ’till the end.

Ok, here’s the deal. I am running again because I actually missed it. I missed the feeling of being fleet and strong and attacking a hill with venom like I OWN that hill, that is MY HILL and RAWRRRR and all that. DEATH TO ALL HILLS! BWHAAAA HAAAAA!S

The problem is -while my HEAD was attacking hills in a sleek pony tail?

The Sledgehammer of Reality is all: 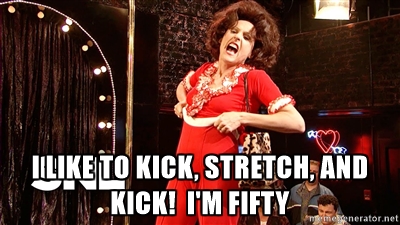 I would like to state for the record that I am not fifty. Not yet. Not that there is anything WRONG with being fifty. Nope. Fifty is just nature’s way of saying, “Ha! Told you!” to all of us.

Really, I don’t want to make fifty mad. If I do, it might come back and bite me in the a$$. Fifty can do that.

So, I continue to run. Yesterday I ate chips and guacamole before going out into the six pm wind and heat, and that run went really well. And for the people who live one street over, I am so very sorry. I don’t even know how to clean that up. I’d like to blame it on my dog but he just stood as far away from me as possible and looked embarrassed. Just pray for rain and avoid your northwest corner.

Also, I now do something called HIIT! (I added the !, for flair) which I think stands for High Intensity Interval Trauma. I think we should just go ahead and add the “S” to it, but you know, it’s not that kind of blog.

I HIIT! things on Tuesday and Thursday mornings and afterwards I do this:

Here I am, post HIIT! Just trying to stay alive, here. Breathing in and out. Eventually the goal was to get up off the floor because the dog was really worried and one cat was starting to lick my calves, in a “Hmmm, this is sorta like Tender Vittles” kind of way. I figured I better get up, or that’s how they would find me – surrounded by cats and with really bad hair.

I tried to blog. My arms were so rubbery that I basically had to fling my arms onto the keyboard and hope for momentum just to try to type something. Making coffee was harder. I gave up after a bit and just sat on the floor and smelled the bag of coffee beans.

And so, that’s me these days. Just thought I’d let you know.

Someday, someday, as God is my witness, I will go on a run and it will be all Chariots of Fire. Me, on a beach, all smiley and British, in glory. 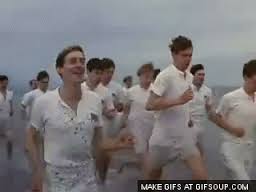 But until then, I slog on. No Chariots of Fire soundtrack. More like, the intro song for The Muppets. You get the idea.

But, may  I add, no one should EVER run in white. I don’t care how good it looks on a beach, it’s just not a wise fashion choice. Don’t you see all the muck you’re getting all over your pristine white shirt, Mr. Toothy British Guy? Your momsie would be horrified.