The Battle of the Tater Tot Casserole 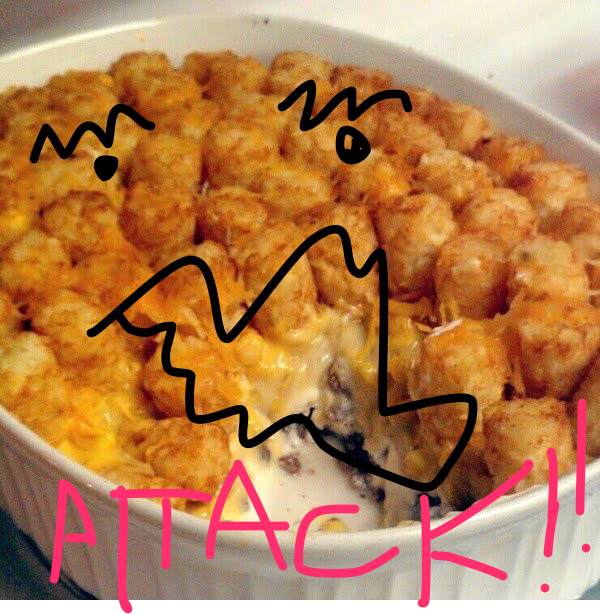 Guys. It’s been interesting over here.

But, I must qualify. I am never one to leave a vague adjective uncontested, I tell you. So… by “Interesting” I don’t mean in a “Season cliffhanger of Sherlock on the Netflixes” kind of way.

I mean in a “Wow, I didn’t know puke could really be that color,” kind of way.

It’s a small difference, but you know.

And, I’m thinking, if you are Sherlock, you are really, really happy for that difference.

Anyhow, let’s get into this.

The Attack of the Killer Flu Part One:

Characters: Red and Momsie. Down for two days. We did fine. We puked. We got over it. Lots of laundry was done (I would like to note here that MOMSIE did the laundry. Yep. That’s right. SICK Momsie. Momsie was still able to get laundry folded AND put away, whilst erpy and for THAT I believe I deserve a huge parade. But it won’t happen because of pay cuts and, as all moms know, we continue on. It’s our thing. Even sick. The only parades we’re having are in our heads.) Red was rather non plussed about the whole flu thing, and by that I mean he SLEPT through throwing up THREE TIMES and when I had to get him up at three am, he asked for VISUAL PROOF OF THE PUKE-AGE because he didn’t believe me. The fact that I was dressed in a Hazmat suit didn’t deter him. He just eyed the stuff, cheerfully got up and headed to the bath. Like a boss.

Characters: Blonde and Big Blonde (aka the husband) and one irritated Momsie. Also, some tater tot casserole.

Momsie, sets the casserole in front of Blonde kid who immediately regards it as if it were the plague-food.

(I would also like to state that Red has started in on the plague-food with his usual gusto paired with a total disregard for silverware.)

Momsie: I clocked out from Mom-ming about five minutes ago. I can’t help you.

Husband: Like, SO BLAND. This is so bland it’s AIR, son. It’s like AIR with TATER TOTS SPRINKLED ON TOP!

Momsie: Ok. You made your point-

Husband: The blandness here is really almost it’s own seasoning. It’s bland with a subtle hint of oaky blandness.

And then the battle was on. Blonde’s stubbornness is rather epic. It’s the Stonehenge of stubborn. Unmoving, and kind of mystical. People could traveL from all over the world, just to study him and find out his stubbornness’s origins, but really?

Me. His stubbornnes is from me. It’s all me.

So, on and on went, our battle of the tater tot casserole.  It was nerve-wracking, like watching four-star generals try to plan their next attack for victory, but with some corn and hamburger.

Finally, Blonde surrendered. He managed to eat three teeny tiny bites, he really did. But the entire time, he swore to me, it was killing him.

Because, that’s parenting. A constant hashmark of who won what and why. I keep a journal where I record all my victories and often refer back to it when I’m feeling needy.

But he sure as heck did yak tater tot casserole all over the second floor of our house about two hours later. So, there’s that.

So, after I decided there wasn’t enough Lysol in the world to deal, and that perhaps just burning down the second story of the house was the answer, which will work out great for Brian and me when we get older anyhow… I realized something:

That whole “Is this the mountain your want to die on?” line really takes on a whole new meaning when dealing with piles of puke.

Yep. You’re welcome for the visual.

Disclaimer: No, I don’t usually regard my children as creatures to conquer. And no, I’m not one to make a different meal for Mr. Picky. But that night? Some toast and a hug would have been a good idea.