Honesty, With a Side of Children

Ok, once when I was still in the amateur division of parenting, my two year old approached me as I was inhaling a bowl of Frosted Flakes. His nose became all quivery, like a sugar-seeking drug dog (I don’t know if that’s a thing, really, but it is in my house. They can hear me open a Snickers bar from four blocks away).

You see, we don’t eat sugary cereal at our house.

And I realize, I am using the “we” very liberally here. Like, “we” as in, “everyone but me because I am special and craving puffy carbs.”

You see, I happen to love sugary cereal. I adore it. I love Bright Yellow Corn Pops and Frosted Sugar Flakes of Thingies and Honey Coated Chocolate Bits of Puffy Non-Grains… I love ’em all. But, I don’t let my kids eat these things because that would be bad. Therefore, I hide the boxes in the lower cabinet with all the messy  tupperwear that leaps out at you, so they avoid it. And when my two year old comes sniffing around while I’m sneaking a bowl, and asks, “Wats dat?” I say:

“It’s spicy, honey. And it’s broccoli. So… spicy broccoli with milk. You wouldn’t like it.”

I have decided that it’s not bad parenting to lie to your child, so you can inhale your bowl of Sugar Frosted Momentary Hope and Carbs in a Bowl, because ultimately, you will be a better parent if you are able to eat it in peace.

It’s the putting on of the oxygen mask, first, mommas. We all know the story – if you’re on an airplane, the steward always tells you – IF WE’RE PLUMMETING TOWARDS EARTH, PUT YOUR OXYGEN MASK ON FIRST, THEN PUT ONE ON YOUR KID. OR YOUR HUSBAND. EITHER WAY, FOR THE LOVE OF GOD, YOU FIRST.

It’s the same with Netflix, people.

Mama needs to watch things before her littles watch them. So, if she happens to binge her way through the entire season of A Series of Unfortunate Events before they can view it…  Look, the show says it’s a SERIES, people. It must be watched as thus. I mean, my children take everything I say literally, so they need to let me do so too, once in while. Especially when it comes to this show. It’s just that good.

Don’t worry. It wasn’t all that serious. And, it wasn’t over The Crown, because, my husband wouldn’t watch a British biopic, however awesome, if it came up, said, “I say, old chap,” and politely whacked him over the head.

Anyhow. A while back? We might have been watching House of Cards together? And we might have stayed up until nearly 1 am one night because we could not stop? And then we finally went to bed? And might have said, “I can’t wait to find out what happens”?

Yea. I finished out the entire season without him the next day.

He still has no idea. I act shocked and appalled at all the right moments, and if all else fails, I make sure there’s lots of popcorn to distract him. This is tough, because I do have a total knack for shouting out, right before the big, bad political thing is about to happen, stuff like,
“HOLY KEVIN SPACEY. THERE’S A BIG BAD POLITICAL KEVIN SPACEY THING ABOUT TO HAPPEN RIGHT NOW. YOU WON’T BELIEVE IT. UM NOT THAT I WOULD KNOW.”

The husband is suspicious, I think. But, I think he’s been totally cheating on me with this:

He won’t admit to it, but I am sure he is because last weekend he made a Victoria Sponge.

So, we’re even, I guess. But I got the better end of this because: MORE SUGARY CARBS. 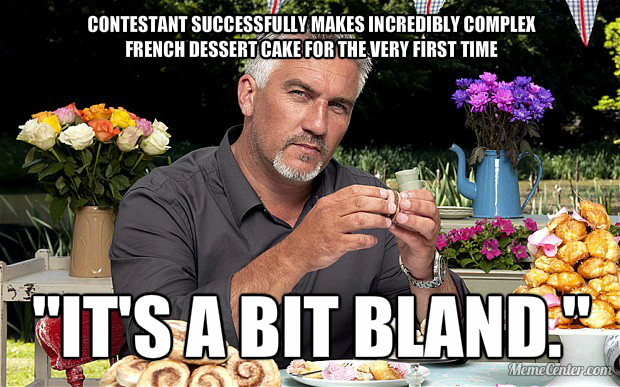