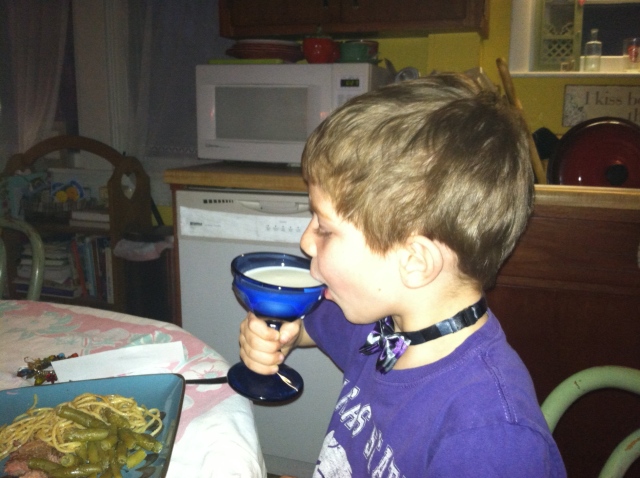 Last Saturday night romance was in the air. It was intense, y’all. It was like we were on the Titanic and I was all Queen of the World, and then I got to make out with Leonardo DiCaprio, not long before I disallowed him room on my totally huge raft in the freezing North Atlantic. Very romantic. And yet, our evening was warmer.

Also, I would never make out with Leo. Nope. I am married, y’all. My husband completes me.

Of course, Leo didn’t grace us with our presence, but we had this blurry pic of another dinner guest:

There were roses. There were chocolates. Earlier that day, the husband let me take a nap, which is the universal, married I Hope I Get Lucky Valentine. But that is another post for another day.

There were also two small boys who had reservations with us for a night of fine dining. I  informed them that they had to come to dinner in ties. And they reacted as if I had asked them to lop off both arms, and then try to attach their ties.

They were informed, in a heavy French accent (I had to take on an accent. It freaks them out and I get to pretend I’m Catherine Deneuve.) “No tie? No food. Zees is Chez Momsie. Dress code, mes bebes.” They sighed heavily, with American accents, clipped their ties onto their Star Wars t-shirts, and showed up at 6:30 pm on the dot. Right on time.

We had a very swanky affair at our house on Valentines Day, and a tradition was born. I printed out menus (thank you, bad clip art!) Macaroni and cheese was offered as an appetizer. I poured the sparkling cider into tiny tippy glasses and no one spilled anything.

It was a Valentines miracle.

We ate strawberries and whip cream, the really fancy kind that you squirt out of a can. I offered table-side service for this, as I offered a shot of the stuff in the mouth to each patron. This was a real showstopper.

And we talked about why we loved each other.

“I love Blonde because he shows me how to play Legos,” says Red. He’s grinning like a maniac. This is all mushy and stuff, which is kind of right up his alley. His smile nearly lifts him out of the chair. He lifts his fizzy little glass with panache. “AND I LOVE THIS FANCY DRINK!” he yells. Evidently he thinks we are all in the other room when he speaks, because the bubbles in the drink had evidently made him quite giddy.

Blonde, the wisened 7 year old, has a bit of a tougher time with the mushy business. He is, in all walks of life, less forthcoming with the mush.

“I love Red because…” We all lean in a little.

“Because he is my brother.”

My boys are growing older and finding their own friends, their own ways they want to spend an afternoon. They are, however, still pretty inseparable. And what I have told them, almost weekly, is that they, as brothers, must have each other’s backs. They are the ones going to be left when the friends leave, when the family goes, when we get dementia and go into the home, your brother will be the only one left.

(I didn’t really go into the last part with them as I didn’t really want to stop and have to explain ‘dementia’ because depressing. Also, the one other time I sprang this word on them they kept thinking that I was saying, ‘Philadelphia.” Confusing.)

(As a side note to the side note: This whole dementia thing? Really possible because we had kids late in life and when they graduate from high school I’ll be using a walker and won’t be able to see or hear the thing because I will be OLD, y’all. I WAS AROUND BEFORE EMAIL. That old.)

We spent the rest of the evening looking up the bible verses that the husband had put on their Star Wars Valentines. The husband is super spiritual that way. I just shot whip cream at ’em. But he wins in the Jesus department.

And then we all tried to massacre each other with a really cut throat game of Go Fish.

And that, my friends, is what I call the most romantic evening I have had in a long time.

I am wondering if it competes with Leo’s?