The Sheets Have Hit the Fan.

Yes, this is a post entirely about beds. The magic happens here, on the Momsie. 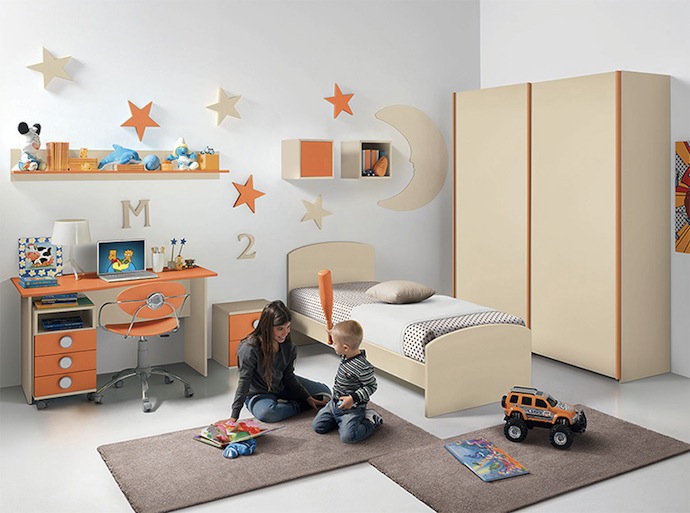 Ok, first of all, this is not my children’s bedroom. Nor is that my child. It’s a stunt bedroom.

Maybe the kid is just CGI’d. And through the magic of technology he is able to sit amongst two measly, but educational, toys without whining about it.

Actually… he kind of matches the room. Note: Must do this with my children.

Anyhow. Winter is coming, folks. And it’s really coming at our house because we are now playing that fun marital game called “When Will You Turn on the Heater.” The husband has a mindset that the heater should come on sometime after we start seeing our breath. As I am typing this, I am wearing a scarf, a blanket, and two cats. It’s cold in here.

But what is really creating an issue is Red.

Red gets cold in August, y’all. He’s a sensitive soul. He walks past the freezer section at the store and bursts into tears. He VOLUNTARILY puts on so many layers that he looks like that kid from A Christmas Story. He was doing this in September.

So, we had a winter storm a day ago. It’s snow everywhere and it’s very pretty and white and, well, cold.

Kinda snowy and lovely, isn’t it? It makes me want to sing Christmas Carols in November, I tell you.

But also, our furnace is out. So there’s that. The husband really meant it when he told me, “Not yet,” after I asked about turning on the heat. He wasn’t just going for the power play. He literally could not turn it on.

Now, before you wonder if I have started to burn the furniture to stay warm, I’ll tell you two things: 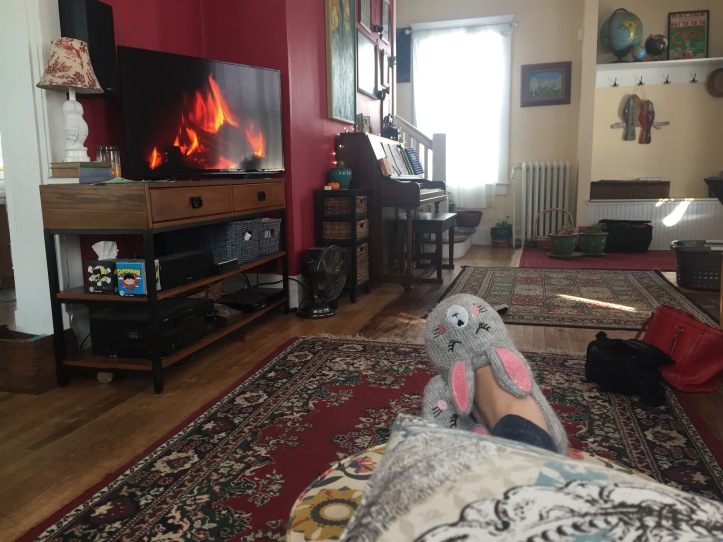 Yes, I KNOW that’s three things, but I tell you, that television fireplace really does take the nip off the air. The mental game here is strong, folks. Also, did you know you could order up this Fireplace Lounge “with crackling” or “without”? So thoughtful! You might want to have a fireplace that is silent and won’t interrupt your workplace with its loud, incessant, pervasive crackling!

I took a risk and ordered with crackling, by the way.

So, last night, as Red and Blonde were getting ready for bed and Red was walking around in that hands clutched to chest, teeth chattering, blue-lipped kind of way like those poor workhouse children did in A Christmas Carol. He whimpered to me, in a perfect British accent,

“But, please Mum, might I have a wee bit of blanket on the bed? I’m freezing me arse off.”

(Please. If you’re British and you just rolled your eyes, let me tell you, our version of Brit here is VERY Dick Van Dyke a la Mary Poppins. It’s not at all culturally appropriate but it’s how we roll.)

(Also, “arse” is semi-acceptable for an eight-year-old to say. Maybe? I dunno. But he didn’t really say that anyhow.)

So, I could not bear to have my wee cherubs all frosty. I must pile on ALL THE BLANKETS on the darlings. And I did so. In about four minutes both kids were so heavily layered with every blanket in the house. Neither of ’em could move, so that was good. They were totally contained and in for the night. Fifty pounds of blanket will do that to you. I also threw a couple of cats on there for good measure. And a partridge in a pear tree.

I left them, whimpering quietly because they were having a hard time breathing. My work here was done. MY CHILDREN WERE WARM. I HAD PROVIDED FOR MAH BABIES.

So, then my wee cherubs woke up. I will not even begin to describe to you, dear reader, the effort taken on my part to unpeel them from the bed and take them, all mewing and shivering like newborn cats, out into the frozen tundra that is our house. There are just not enough analogies for that business.

It was hard. I’ll leave it at that.

But later, as is customary, both children were sent upstairs to  make their beds before they left for school. We must make the beds. It’s is very important. I have it on the highest authority that a well made bed is a sign that one day that child will be a contributing member of society. All of you non-bed makers? I don’t know how you live with yourselves. It’s un-American.

(I have been known to make my bed again right BEFORE I get into at night because I want to sliiiiiiide into taughtly wrapped sheets before sleep like a slice of American cheese in its wrapper.)

And here in lies the rub:

One child (older) views bed-making like his arms have been tied behind his back and all he has are his teeth and a really lacking work ethic to accomplish this task.

The other (younger, more chilly) has the perfectionistic zeal of his mother, but lacks in basic skills, so his bed-making takes FOUR HUNDRED YEARS.

I ask you, which is worse?

No, really, I’m asking because I’m at a loss here. I can go with Lump Bed or Military the Really Late. What do I do?

As per usual, there was yelling. It is customary that each morning is paired with loud comments like, “It’s 7:54 would you get down here! It’s time to leave! School! SCHOOL, CHILDREN!” And as Blonde is already leaning against the door, ready to go, and sighing heavily, you know the rest of the drill:

“RED JUST GET DOWN HERE. STOP DOING A GOOD JOB WITH THE BED. JUST STOP IT! STOP DOING SOMETHING WITH GREAT ATTENTION TO DETAIL, CARE AND PRECISION! HOW COULD YOU.”

And that’s how I win Mothering, yet again, for today.

Update: Husband is currently working on heater. As I am typing this and cannot feel my fingers, I am very grateful.

Also, this creature does not make his bed very well either. I’m working with him. Progress, not perfection: