Throw Back Thursday, Netflix StreamTeam, and The Dude

It is a very tough life to be a cat around our house.

The above is Steve. AKA  The Dude.* Also, his rapper name is Big Fat Furry, if you wanted to know.

He has various jobs around the home. Things like:

4. Flopping down right in your path in the kitchen while are trying to cook, so you trip over his expansive furry tummy and end up excessively apologizing to HIM for being in YOUR way.

5. Wedging his fat arse into boxes too small for that furry action.

That’s a gift bag. And some ugly linoleum. But, he stayed in there forever. I think he thought he was, um, camouflaged. Poor dear.

Actually, he does kinda match the floor, doesn’t he? So, he’s brilliant!

Anyhow. We love Steve. We also love the other cat we own, a little female furry ball of neuroses we call Bob, but she refused to take a picture for this post. “It’s not in my contract,” she told me, as she slunk off.

It’s ok, Steve was more than happy to pose. Diva.

Steve the cat seems to have a lot of similarities to another favorite cat in our family: 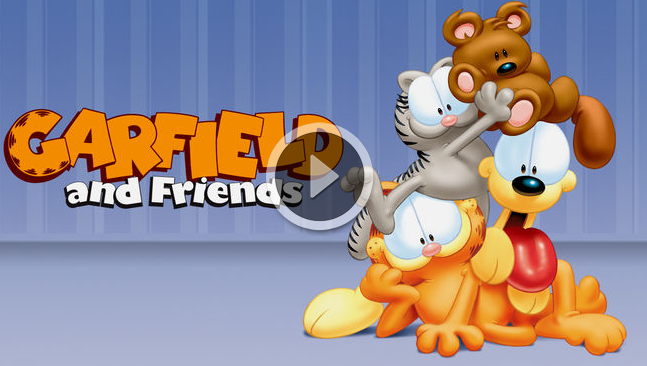 When I was a kid, my sister and I LOVED Garfield. I had Garfield posters.I think I had a Garfield Trapper Keeper. I also had Garfield shoe laces. It was all very very important to be All Garfield, All The Time.

And now I get to share Garfield’s biting sarcasm and love of lasagna with my kids.

Only drawback: I now have had lasagna as a request for dinner on numerous occasions, and no amount of spaghetti will do it. Do you know how complicated lasagna is? It’s got layers, y’all. The only layered food I can really master is a peanut butter and jelly sandwich. And even that gets tricky. Peanut butter first? Or jelly?

Garfield and Friends is available on Netflix and we love him so. We love his disdain and his love of sleeping. (I REALLY appreciate his love of sleeping now because, sleep is so awesome. And children take it away. So I live vicariously now through an orange cartoon cat.)

We also love Odie, who reminds me of a similarly goofy creature in our house:

And thank you, Stouffer’s, for making frozen lasagna. You both have saved the day!

* If you didn’t catch it, The Dude is a reference to The Big Lebowski. This wonderfulness is also available on Netflix. But, the lawyer would like me to add that it is NOT for children’s viewing. There is a bunch of sarcasm and lolling about in it, though, so  Steve would like it. I would just have to cover his furry ears during the saucy language.