Have a Scare-Free Halloween with Netflix

I have no clever leader here. I am simply too thrilled about Fantasia. The centaurs, cavorting! Mickey and the Sorcerer! The romantic ballet between a hippo and an alligator!

Ok, if you haven’t seen Fantasia then you have NO idea what I’m talking about. Allow me to explain:

FANTASIA! THE BEST! SO AWESOME. I CAN’T EVEN!

Sorry. Ahem. Let me try again: Fantasia is a Disney movie, made in 1940, and it’s unlike any other Disney film made. Ever. It’s a celebration of animation, art, and music. So, dudes like Tchaikovsky (thank you, spell check) and Beethoven show up.

And also, THIS DUDE:

Try meeting up with him when you are about eight years old, in a huge, darkened theatre with a gigantic screen and soft red velvet seats and my mom’s treats from her purse because we never actually BOUGHT treats at the concessions. Don’t ask me why I thought it was important to include that detail, but know this:

Regarding the movie house concession stand: I DO THE SAME THING. My momma taught me well.  I have been known, on occasion, to bring a Diet Coke in to a movie and do the Diet Coke Cough whilst popping it open. They get you at the concessions, people. Bring your own.

ANYWAY. BACK TO FANTASIA.

We have a rule at our house – no scary or spooky for Halloween. My reasoning?  I have kind of had it with 2016 and have decided life is scary enough.

But then… I saw Fantasia in my Netflix cue and thought, “Hey, Satan coming out of a mountain on Halloween night to summon up the undead isn’t THAT awful, right? I FEEL A FAMILY MOVIE NIGHT COMING ON!”

Yea, I know. Consistency is key in parenting. But, to my credit, THIS Satan has a classical score (Night on Bald Mountain by Mussorgsky and then adapted by Rimsky-Korsakov, and if you can rattle off all that Russian in a crowd you will totally impress people. I think. Or, you might spit on them. It’s a lot of ‘S’s.) Also: Satan and the mountain is followed by this:

It’s a painting, on the screen.

Satan is banished. We are safe, and sacred, in a cathedral in the trees.

I love Fantasia. And no,  It’s certainly not a typical Halloween movie. No jack-o-lanterns. No tricks or treats. But for us, it was perfect.

And also, this year? I have my new costume idea:

Hyacinth, the Hippo, dancing to Amilcare Ponchielli’s Dance of the Hours.

For those of you who are a bit braver, here’s a clever idea – Netflix’s savvy understanding that the doorbell can impede serious Netflix binging on all things scary. So, may I present you with  this: 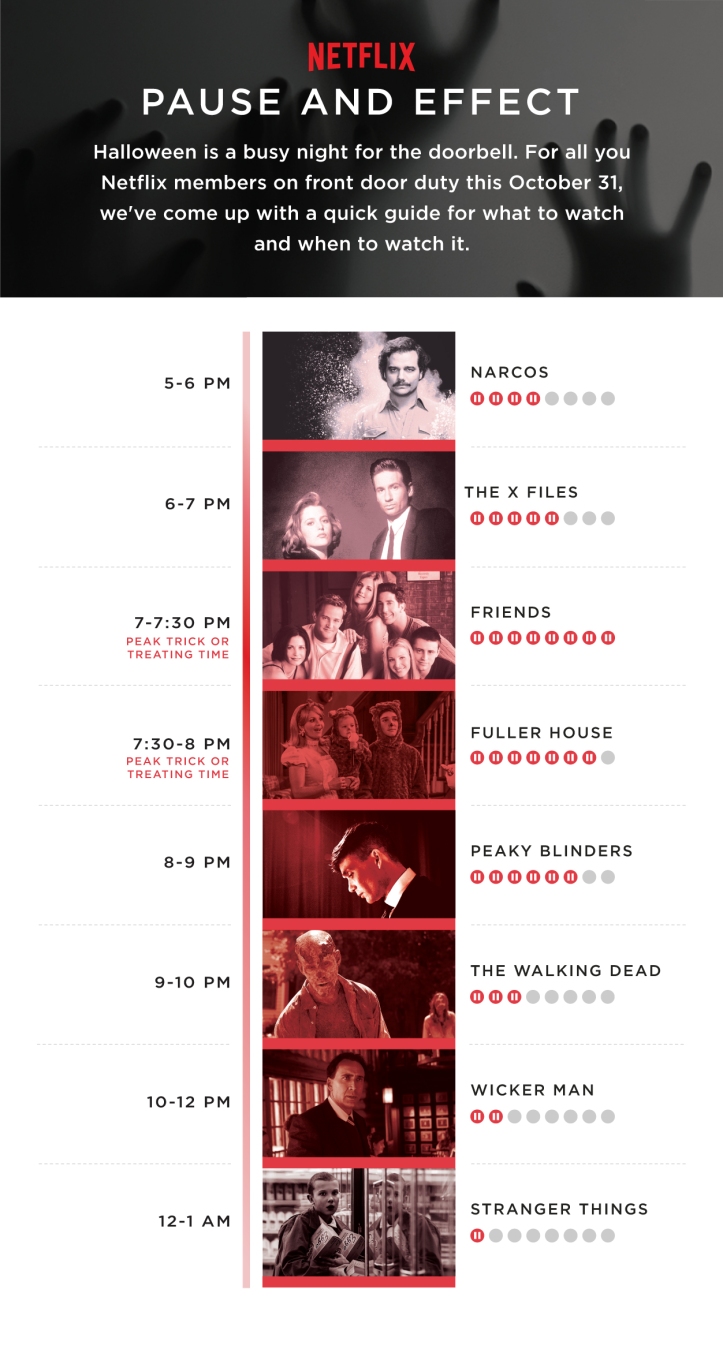 Good luck with the viewing of the 9-12 slot. I just can’t. Too skeery!

Or, if you are really up for a scare, watch Chopped, the kids’ episode, and start training your kids to step up their game because:

THANKSGIVING IS COMING. Be afraid, kids. Be very afraid.

“So… Whose dish will be on the chopping block?”