It Seemed Like A Good Idea at the Time

So, a few weeks back, my family decided to play hooky for a day and visit the state fair.

First of all, let me also state a few things:

We had a fabulous time.

We looked at gigantic pumpkins.

And then… we went to look at a butter lady riding a butter tractor. These are the kinds of things we see at the fair. It’s not exactly The Magic Kingdom. 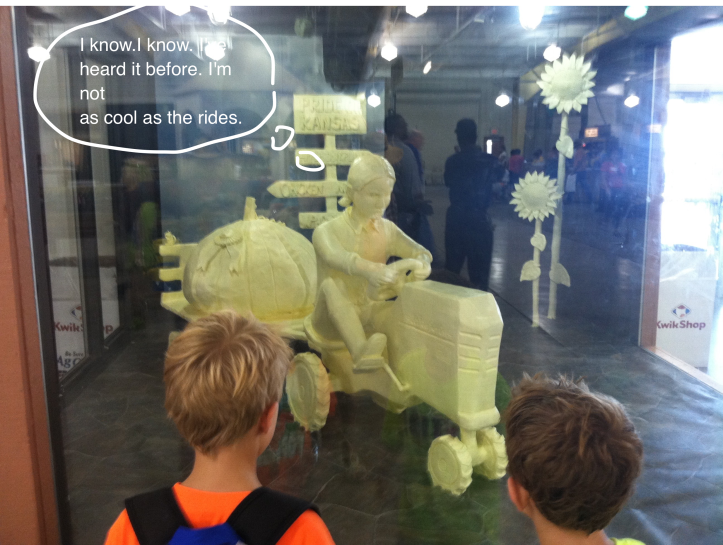 And yes, and there was that moment when Red put a gigantic skunk on his head:

Clearly, this skunk would have preferred the rides.

But yes, eventually, we did go ride some rides.

Not that one. It goes up in the air and then spins. This is just nonsense. Even the birds, walking around for the stray popcorn, would look up at it and shudder.

But, we rode this one:

Shockingly, this ride has a big splashy part at the bottom of this hill. Onlookers get splashed, too. It’s adorable.

I like to call this: “My Children. Contained and Airborn”

So, as the day was drawing to a close, we were finishing up our lemonades and cotton candy and watching all those poor schwubs toss rings at the beer bottles, EVEN THOUGH THEY NEVER MAKE IT ONTO THE BOTTLE. HOW MANY TIMES DO YOU HAVE TO THROW THE RING, PEOPLE, TO FIGURE THIS OUT?

Anyway. As we were walking about, I spied it:

Ok, I didn’t take that pic. But, my head took that picture, where the Tilt-A-Whirl resides, in my little-girl memories. When I was little, I would never go on carnival rides. They scared me. My sister would gleefully load herself up onto something redundantly called “The Killer Swings of Death,” get strapped in by some guy with seven teeth, and I would stand on the ground and watch. Longingly.

Except the Tilt-A-Whirl. Now, that I would ride. It was a blast! Jenni and I would pull down the safety bar, and wait for the lovely, dizzying rush of the whole tilting and whirling thing. I would lean my head back and scream and laugh until I was breathless.

So, it seemed like a good idea to do this:

“Hey guys! The Tilt-A-Whirl! My favorite (actually only) ride that I’ll set foot upon! Let’s go! IT’LL BE FUN, KIDS!”

As God is my witness, it seemed like a good idea at the time. Also, I should have known better. Any mom will tell you. If you say, “It’ll be fun, kids!” to your children? It never is.

It started out pretty good, I’ll grant you that. We sat, and giggled. There was some whirling. And tilting. And I was all… “Still a lot of fun going on here! Nothing bad is gonna happen! We’re all smiling!”

And it was fun. And then… it was SO NOT FUN.

I don’t know what happened, but somehow Blonde and I must be linked with a psychic connection. Not in our minds, mind you. But in our stomachs.

I looked at him, and he looked at me, and I knew. I just knew.

If vomit came out of either one of us, the mess was just going to go everywhere. Like, there wouldn’t be enough paper towels in the world to deal with spinning puke. It could go for miles, I tell you. Don’t you remember centrifugal force in your science class, friends? Try it with the stomach contents of two people who have eaten carnival food for the PAST FOUR HOURS.

This was really, really bad. It was like one of those Nicholas Cage movies, with all the bad acting, and heroic soundtrack, and wind. And someone was reaching for someone else’s hand, saying things like, “Don’t let go!! I’ll save you! Hold on!!!! Let me light some flares and grimace a lot!!!!”

See what I did there? I turned a Tilt-A-Whirl gone wrong into a Nick Cage movie. That’s quality writing, folks.

I leaned my head back and met Blonde’s eyes. “DON’T TAKE YOUR EYES OFF ME AND BREATH! BREATHE, BLONDE!” He blinked a few times in reply. “THAT’S GOOD! KEEP BREATHING! NOW COUNT WITH ME! COUNT TO TEN, BLONDE! COUNT!!”

He blinked his counts. I think. I don’t know.

All of this was really working. I was talking my kid out of hurling all over the stratosphere. That’s POWER, y’all. I was dredging up every last ounce of Mom Super Powers which do include You Can’t Puke Here if the Force is really strong with us.

Ok, that’s not really a problem, the Red thing. It was just super annoying.

We survived. There was not actual vomiting. We both were on the cusp, which makes it sound so much more pleasant. Don’t you think?

Scratch that. There’s really no way to make any of this sound pleasant at all.

So, as Blond and I staggered off the evil Tilt-A-Satan, I put my arm around him. We had been strong. We had been brave. We had fought the good fight. “Well done, kid,” I said, patting him on the back. “So glad you didn’t hurl.”

Of course, it wasn’t my kid. I was too dizzy to notice that he was over with his dad. I was clutching some stray blonde kid that looked up at me and said,
“MOOOOOOMMMMMMM!”

Such a fun day at the fair.