Throw Back Thursday and Tiny Stormtroopers

Halloween is nigh, my friends, and it seems we have chosen Star Wars as the theme.

This year, sweet Red, who has been Luke Skywalker for the past few years, has chosen Darth Vader. My son has chosen the Dark Side. I know. I could read a lot into this but really? I’ve seen him in his Darth costume and it is fer SURE adorable. You can’t be full on Dark Side AND be cute at the same time, so that saves it.

Here is a throw-back from a two years back:

This should be fun! So let’s get started.

Ok, one of my favorite scenes from Star Wars was when Harrison Ford has that cute conversation with the dude on the intercom. I love it because he is SOOOOO cute! The cuteness! The cute swagger! And he fits in his Storm Trooper outfit really well!

Yes, little ones, I am referring to the real Star Wars. The one that I watched in Glenwood Theater in Overland Park, Kansas in 1977. I was 8. Harrison Ford was a bit too old for me. I had feathered bangs, and Glenwood Theater had a chandelier, people. And velvet seats. And a deep red curtain that opened before each showing. It was an EXPERIENCE, y’all.

The other reason I love that scene is that I kinda feel like Han did in that controller room all the time. Sorta, erm, on the edge a bit and also: TOTALLY FAKING IT ALL THE TIME.

So here’s an update on my week:

The gigantic box from Netflix? Remember that?

Well, it was just a tv. No biggie. Just a gigantic tv. Because, you know, I’M AWESOME.

Here is how my family reacted to this:

Husband is blurry because I was giggling.

Ok, also: we had Halloween. So we have ONE picture of ONE child. I don’t know why. Just ONE child evidently was photogenic enough (barely, you’ll see) for me to point and click at him.

Riiiiiight. I know. You can’t see him. Someday I am totally going to get fired for lousy photography. But, also…

“Aren’t you a little short for a storm trooper?”

BOOM. I have been waiting my whole LIFE to be able to channel my inner Leia and say that! And now I can! With a blurry, dark photo of my cute, and short, son! 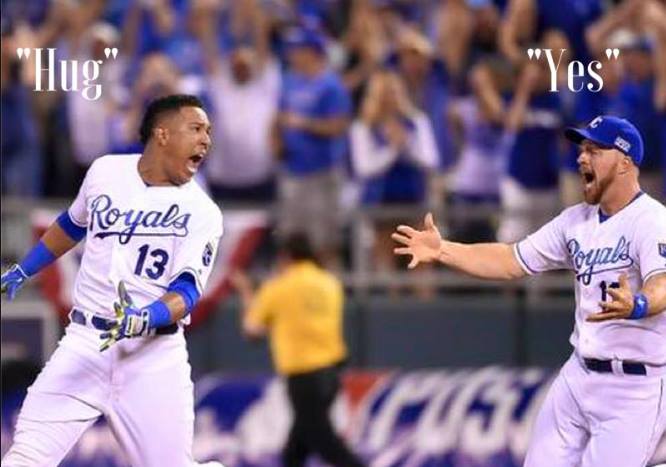 WE WON THE WORLD SERIES. There is such goodness about this I can’t even use words. Well, no, I CAN use words, but they just won’t really do it justice. It is wonderfulness. It is nail biting games and extra innings and Salvie messing with us whenever he talks and stealing home and just a sprinkling of Paul Rudd, for flavor.

By now, I bet you’re wondering… where does the guilt part come in?

I abandoned my child. I KNOW. This post took a rather abrupt turn, didn’t it? We were all happy and celebrating holidays and big screen tv’s and then, WHAMMO.

Here’s the deal. My sweet Red, who is wonderful and adorable in every way, is also, well, how should I put this:

Slow. He’s just really slow. He likes to do things slowly. All the things. Eating. Pooping. Walking. It’s all slow.

This totally doesn’t bother me at all.

So, this morning, for some reason, Red really really had a rough time with some basics: I told him to get dressed and I found him, in his underpants, staring out the front door at the sky as if he were contemplating his life choices for his long five years.

Socks. Same problem. Found him upstairs in the train room, just standing there. It was creepy.

Brushing teeth? I don’t even think we got there because we were still stuck at socks. Poor teachers.

Anyhow, finally, I snapped. I uttered these fateful words:

“Red. We are leaving. You have one minute. If you are not ready to go then Blonde and I will have to LEAVE WITHOUT YOU.”

And. Well. To cut the suspense, I’ll just tell you. He got left. We left him. I LEFT him. I took Blonde, grabbed the dog, and walked AWAY FROM MY BABY.

But I think he did hurry up a little. He made it to a block from school and I spotted him. He was sobbing and all the mothers of the entire town were surrounding him. I think a few cars had pulled over. Police helicopters were circling overhead and Fox News had been called.

I walked up and said, “He’s fine.” Not the best thing to say. I then explained (because he was NOT fine, but he was “learning a lesson” from his “evil mother” who had to “not relapse because of this morning” and needed to, no matter what, “stick by her words no matter how much it was gonna freak her and the entire community OUT.”)

I explained the situation, and Red headed off, with me behind him. One mom gave me a sympathetic smile, but I swear another one has decided to shadow my house now.

Sigh. I know. All of this kinda puts a pall over the new tv.

Mommies. I’m doing the best I can. We had done the morning dawdle routine just one too many times. I decided to stick to my guns. I just didn’t expect this:

He broke my heart. Seeing him here, all sobbing and sad. I just don’t know. The kid learned a lesson but I did too. If I am going to leave my kid to fend for himself I need to figure out a way to do it with in air surveillance and nerves of steel. As I have neither of these things I am going to try out one of two options:

And that was my morning.

Everything’s fine here. And… How are YOU?