Not a lot of depth, whole lotta shimmy and shake.

I used to think that reality television was so lame, y’all. I mean, who would want to watch some mom try to feed her eight children while learning her new dance routine while losing weight and also picking fights with everyone?

Who would wanna watch that?

Ok. I am not into a ton of reality shows. I have my favorites. They usually involve food and anything with Paul Hollywood, and I tell you, true. Paul Hollywood could butter toast and it would be done with a steely, blue eyed stare and he wouldn’t even have to touch the butter with a knife: HIS EYES WOULD MELT THE BUTTER. LIKE MELT IT, RIGHT ON THAT TOAST.

But I digress. My POINT is that I wonder sometimes… do you guys really wanna read about my life? Like… watch me do some laundry and then put it away? Like… that really makes good reading? For reals?

Well, if the Kardashians can do it, so can I.

Scratch that. I kinda have to think that the Kardashians have someone ELSE do their laundry. They mainly seem to sit around on huge, fluffy couches a lot and then do yoga in impossibly tight and misappropriated yoga clothing.

Anyhow. I am telling you all of this, to basically say:

Like every reality show, in the history of ever, there’s not a lot going on here, but there’s a whole lotta shimmy and shake.

So, we got back from Thankgsiving. We were gone for three days. It was like a non stop buffet of really good food (I tried to be good but at one point I think I might have actually taken the entire “take home for the family” plate of pie upstairs in bed. My husband found me gnawing on it like a guilty chipmunk, and then Brian walked toward me, and I had a mouth full of pecan pie and I tried to have a totally normal conversation with him. It was pathetic. I relinquished the pie plate, sorrowfully, after that. It was like Intervention, only with pastry.)

So, after we got back home, I looked around.

It was like my house got mad at me while we were gone. It was a MESS.

There are levels of mess in every house’s life. Some levels are just cluttered. Some are disheveled.

This house looks like it partied in Vegas all weekend.

I texted the husband:

He responded with his oh-so-usual caring: I’ll help, don’t worry, it’s not so bad nonsense. But I knew, I KNEW, that if I did not deal with that house they would never find me. I would be buried under forty loads of Batman underwear and dirty dishes that learned to procreate on their own.

Of course, while I was cleaning I did have a helper. 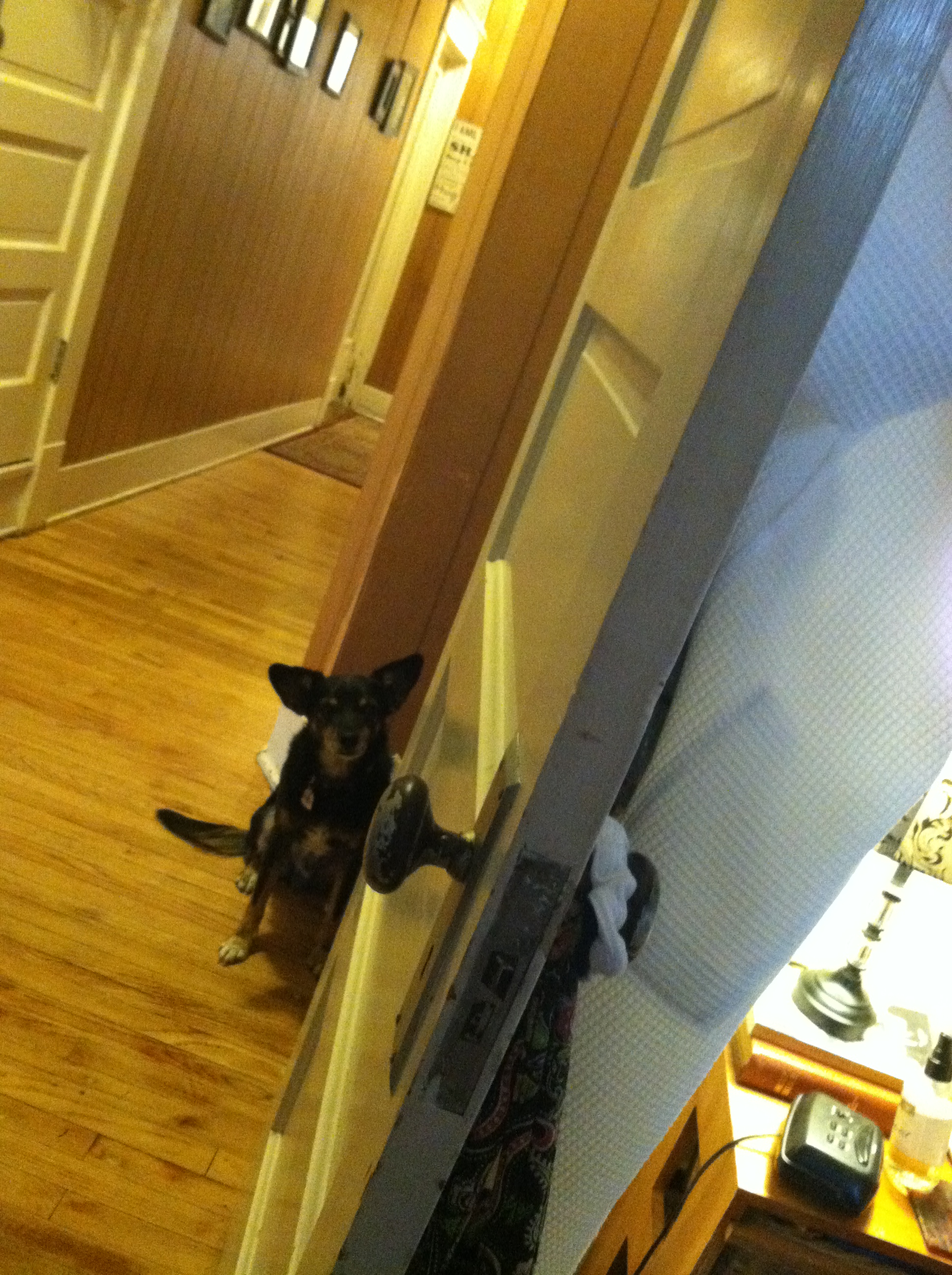 This is Dog. He has some sort of device implanted in his brain that makes him follow me closely wherever I go. Also, I do know I have the beigest hall in the history of halls. It’s a sad little hallway.

So, I would walk down beige hall to put laundry away.

Dog: OH MY GOODNESS I WILL GO TOO! WE WILL GO TOGETHER! WE ARE ONE AND I JUST CANNOT STOP STARING AT YOU BECAUSE YOU SMELL SO GOOD AND I LOVE YOU. THIS HALLWAY REALLY COULD USE A SPLASH OF COLOR!

Then, I walk back the other way, same beige hallway.

Dog: OH NOW WE’RE GOING TO GO ANOTHER WAY?? I THINK THAT’S THE BEST IDEA EVER! YOU ARE SO SMART AND CLEVER HOW YOU WALK BACK AND FORTHING WITH THE PILES OF THINGS! I LOVE YOU!

Then, I go down the stairs. Beige is done.

Dog: Oh HO! THIS IS SO EXCITING! DOWNSTAIRS! I LOVE THAT PLACE! I LOVE THE DOWNSTAIRS WALKING!

Dog: AND I LOVE YOU.

So, after about four hours of washing clothes I was done. (How did so many clothes HAPPEN? I will give away all the clothes. That’s what I’ll do.)

(Should make for an interesting, albeit chilly, winter.)

And that is my post. It is basically about me doing laundry, but there is also this:

As I was walking back and forth, to the endless delight of Dog, I got a great idea for a story. I needed to write it down, so I grabbed my little notebook. Then, I looked for a place to store the notebook, because as every good writer knows, ones notebook must go back and forthing with you, everywhere, because you never know when the good ideas are gonna strike.

I didn’t have on a bra. That is how I clean. I refuse to be constrained. I might need to clean something up high, and my bra could accidentally snap and strangle me, and I would be found, later, by my husband, snagged by a bra strap, with the cats hungrily circling me.

Also: bras are just a pain.

So, I couldn’t tuck the notebook into my bra. Instead, I tucked it inside my pants. Logical. Sorta weird, but logical.

And then I kinda forgot it was there, until I went to the store and as I was walking down an aisle I laid a notebook.

Undeterred, I said, “Ta DA!” and picked it up and went in search of applesauce.

Dog: I STILL LOVE YOU.