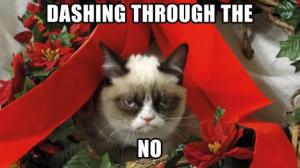 I have nothing else to say about that.  Except this:

Da TODDLERS ARE IN DA HOUUUUUUUUUUUSE!

So, what is a Momsie to do?

List of options for toddlers cooped up in a house when it’s minus coldtillion degrees outside:

1.  Bundle ’em up for 20 minutes, a la A Christmas Story, set them out on porch, watch them start crying.  They will ask to repeat entire process later as if memory is wiped.

2.  Consider wiping own memory with peppermint schnapps.*  (What?  It’s festive.)

3.  Put on The Price is Right because it’s educational, and your antenna isn’t receiving signals for PBS.  Antenna is cold and has put in its transfer papers for Florida.

4. Curl up in fetal position in kitchen until children find you there, clutching your Ovaltine.  In your best Sixth Sense whisper, say,  “We’re out of marshmallows.”  Red: “Da marspellows.  Oh no.“

5.  Rethink light therapy when one of your toddlers repeatedly blinks your LED flashlight in your face.  I don’t really get the science behind this stuff but I’m pretty sure the goal is not a seizure.

6.  Consider laundry because “We’re going to wear jammies today!” fun has worn off due to crusty jammies.

What does a slightly crusty, tired Momsie do?  She cranks up the Mandisa, and she makes some COMFORT FOOD.

In the past three days I have whipped up chickens soup, bread, some pretty awesome turkey Tetrazzini, more bread, and this: 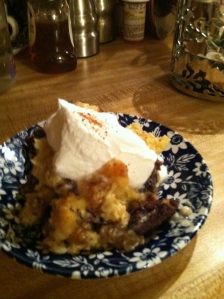 This all started when I realized we were on the brink of (gasp) having to throw OUT some goodies that had gotten a bit stale.  Like, crouton stale.  I don’t really know how it happened myself. Usually sweet stuff around here is gobbled up quite expediently.  Perhaps it was the glutton 911 aftermath of Christmas. I dunno.  All I know is that I had two lovely desserts that were on the brink of despair.

Miser Momsie does NOT throw out food.  She just repurposes it.

1. My first step:  Visit my friend Diane over at Recipes for Our Daily Bread.  You didn’t really think I was going to have the baking chutzpah to come up with my own bread pudding recipe, did you?  I needed some help.

I started with a yummo recipe for white chocolate bread pudding.  Click here for the directions.  This is a great recipe and very easy!  Right up my alley.

2.  But then, I tweaked it.  (I know what you’re all saying.  We’ve discussed this before.  Momsie and tweaking recipes = not good.  Sorta like Momsie and twerking.  But that’s another post for another day.)

I cut up my beloved cinnamon rolls and chocolate cake leftovers into small cubes, and used these as my “bread” for the pudding.  They did not need toasting – their staleness was exactly what the recipe requested.

3.  I then simply proceeded to make the bread pudding as directed.  And SHAZAM!  (“Shazam” is  Southern for “voila.”)

4.  One error:  I made the hubs a plate with some whipped cream (no ganache yet, didn’t have time).  He ate it right up, in all its warm, gooey, sweetness.  AND THEN PROCEEDED TO EAT OVER HALF OF IT JUST WHILE STANDING AT THE STOVE.

So… I never made the white chocolate ganache.  Didn’t need to.  Whipped cream or just a spoon and a stove served just fine.  However, I did consider making the ganache later just so I could drink it out of a mug and call it my version of hot cocoa.

And so, another baking story of success to add to my vast repertoire.  It does bring back memories of my first bread pudding.  NO!  Don’t you sidle away from the computer!  Come back here and listen to my Bread Pudding Story!

We had just moved to town.  I was invited to a bible study.  I wanted to dazzle and impress.  The bible study was stuffed full of MOMS with LOTS OF CHILDREN.  I was a newlywed with starry eyes and absolutely no skills whatsoever.  That didn’t deter me.  Never does.

I made bread pudding.  Strawberry and cream cheese, if I recall.

I took my patio paver offering to the study, and when I set it down, the resounding “thwack” of that thing hitting the table actually made a few ladies wince.

About three ladies choked it down.  The rest prayed.  Over me. Over the bread pudding.

*No schnapps were ingested before, during, or after the making of this post.  That stuff’ll kill you.  But that’s another post for another day.